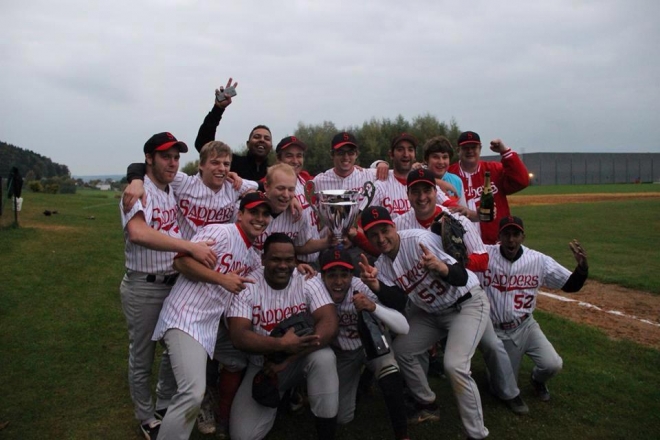 The Red Sappers are 2013 BSFL Champions! They win their first national title of their short 7 year history and handed the Beckerich Hedgehogs their first finals loss in 10 years!

Sunday afternoon the Red Sappers won the doubleheader 12-4 and 10-6. After 18 innings and 6h30 of play the Sappers could finally hold the championship cup! These were hard fought games as the Hedgehogs were a tough opponent to the Sappers. The Sappers proved to be flawless defensively and displayed a lot of power offensively hitting 8 home runs on the day! Nickels had 4 home runs and 9 RBI's on the day, he had 2 home runs each game. He is the 2013 season MVP! Congrats for his amazing season. Strock D. added 2 home runs on the day, Pena had one and Fermin R. had one.

In game 1 Pena pitched a complete game with a pitching line of 4ER, 6H, 6BB, 5K. He was a big reason why the Sappers won game 1, he was able to locate pitches well in the zone and he made it tough for the hedgehogs hitters to do anything productive with it. He surrendered one Home Run to Godoy and that was about it. Also the Sappers defense made some explosive plays in the infield, for example a 6-4-3 double play in the first inning to erase the leadoff runner. The whole game was full of groundouts or fielders choices where the Sappers would erase the runners in scoring position.

The biggest reason of the Sappers being successful this season was to have a second pitcher who could share innings with Pena which is why the Sappers became champions in the German championship as well as in the luxembourgish championship. The Sappers will play in a tougher division next year but first of all will savour this win before focusing on next season.

This win belongs to the team, without the whole group none of this would've been possible!!! Go SAPPS GOOOOO!!!!

Find the championship gear in our online shop: http://redsappers.spreadshirt.net/