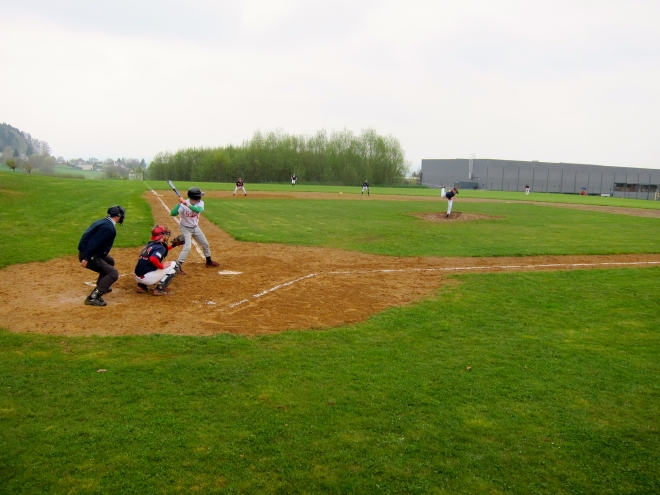 The Red Sappers beat the Trier Cardinals 18-14. It was a breathtaking game as 8 Red Sappers were on the field for the final 3 innings. Due to a miscue of their coach Strock, the Red Sappers had to play 3 innings with only 8 players.

He had 4 players on the bench at the beginning of the game but when he already made his changes and Nickels had to leave the only player left on the bench was Rodriguez who would've been the 4th foreign player on the field. As a team is only allowed to have 3 non EU players on the field it left Strock no choice. At that moment the score was 11-8 for Trier.

The game didn't start well for the Red Sappers as the Cardinals scored 7 runs against Strock C. at the top of the first but the Cardinals would only score 6 more runs over the rest of the game. The Red Sappers fought slowly back into the game and finally tied it up at the bottom of the 7th.

This game again proved how this team has a great chemistry and always keeps fighting until the end! This game was a team effort with 8 Players at the end! Go Sappers Go!!!

Next game vs Diekirch on saturday may 4th at 2pm!

Here some videos from the game

http://youtu.be/ozNa05JHOuc Julio crossing the plate after his HR