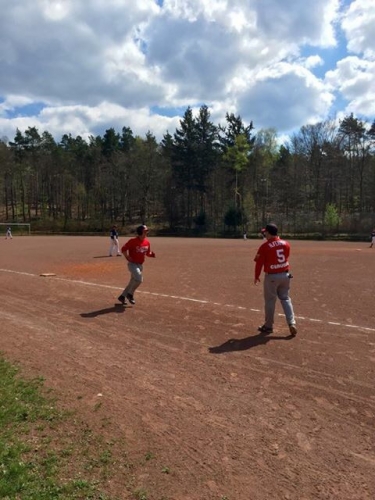 D.Strock lead off both games with a Solo HR! Hitting 4 in 2 Games, good job Bro!

1. Game : Godoy pitched 6 innings and allowed 5 hits while striking out 6. Sappers batting was much better against Göring than last year, a couple of hits by their manager/player strock d. allowed them to keep the game tight. He showed his talent by hitting 2 solo HRs, a triple and a Single in the first game. The red sappers put a few baserunners on base but the Red's didn't manage to bring them in.

However, great defensive plays kept the game interesting like the double play (4-6-3) from José Gomez at 2nd Base and C.Strock SS or the big catch in CF by J.Fermin. But some miscues like a botched run down allowed the bears to score a run. final score 5-2.

2.Game : The Sappers had an 8-1 lead thanks to a few walks and hits at the beginning of the game against a very young pitcher. F.Peña pitched great the first 4 innings getting quick outs (he got through the 4th with only 7 pitches). After that the bears were hitting his pitches and putting more pressure on the sappers defense.

It seemed like the sappers took that game too easy and concentration got lost, errors by the Sappers allowed the Bears to get back in the game. Consequently, the bears ended up walking off in the bottom of the seventh, final score 11-10.