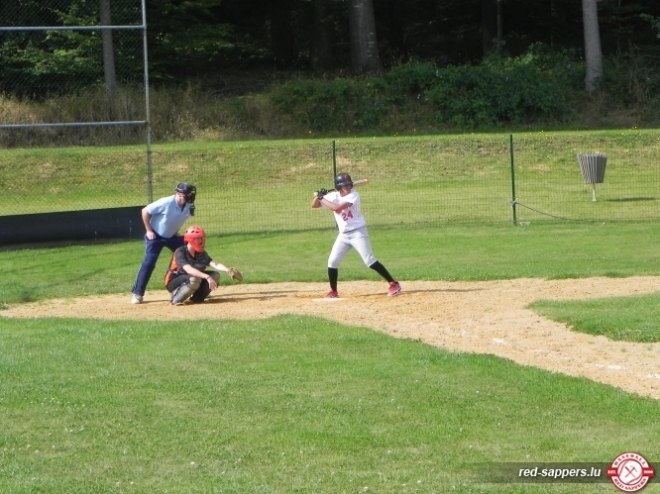 In three days the first game of the best of 3 game series BSFL 2012 finals will be played at stade jos nosbaum in Dudelange. Playball will be at 7.30pm.

The remake of last year finals will be a promising series. Last year the Hedgehogs dominated a young Red Sappers team which couldn't avoid the rout. This year the Red Sappers are looking forward to be more than an equal opponent for the Hedgehogs. The Red Sappers have made huge improvements in a lot of different departments. They added a few experienced ballplayers like Schneider, Scheulen and Fermin R. to their roster. Their 2011 rookie of the year Pena just kept improving and is their ace. When Pena is on the mound he gives the Red Sappers a chance to win a game, he is going to be ready and will try to topple the Hedgehogs.

The Red Sappers will play this series without Valenzuela who returned to his home country the dominican republic. Also Nickels who is studying in america won't be there. Fermin J. more likely will miss game 1 for study reasons, he will be available game 2 though.

Manager Strock is aware that the Red Sappers pitching isn't as deep as the pitching of the Hedgehogs but he knows that he has a few talented arms in his roster and he is looking forward to let them pitch.

The Hedgehogs lost a few key players this season but also added a very dominant pitcher to their roster, Lutgen. He will be most likely pitching in this series as well as manager Slavazza from the Hedgehogs who was last years MVP.

A thrilling series ahead, come and support the Red Sappers during this series! Food and drinks will be available at the field!

Sunday Drauth and Fermin J. will join the squad