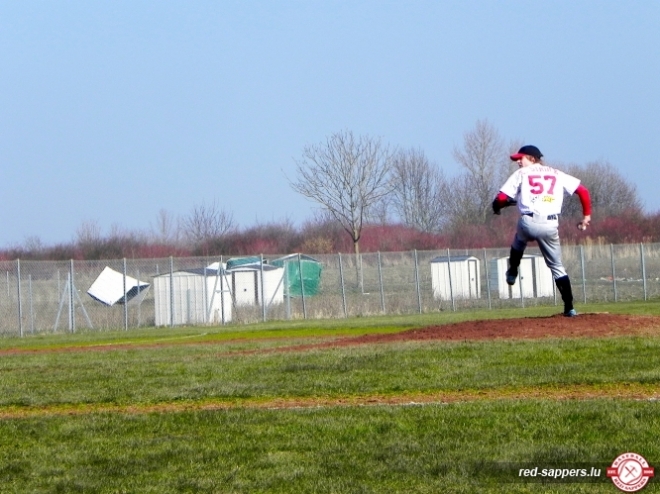 The Red Sappers had their first exhibition series yesterday and they won the series. One game was played against Argancy Bootleggers 2 and one game against Cometz Metz.
Although the weather conditions were quite chilly with maximum 6 degrees celsius, the sun made it possible to play.
Strock C. started the first game as a pitcher against Argancy 2 and he was sharp. He would allow 5 runs over 3 innings. Strock D. finished the game and allowed 2 runs. Offensively the red sappers were hitting the ball hard, Strock C. had a good batting day.

The second game against Metz was very well played by the Red Sappers which cruised to a 15-7 victory. Pena pitched 2 innings and was looking very sharp, Alvarez tossed 1 1/3 innings and Fermin R. the last 1 2/3 innings.
Alvarez made his debut with the Red Sappers yesterday and he made a very good impression, he could be a key factor for the season.
Overall the Red Sappers were good defensively and offensively everybody had his part in both games.
Next up the tournament in Metz on March 16th and 17th.

Link to the photos of the game: http://www.sport50.com/redsappers/index.php?site=page&id=gallery&galleryID=149