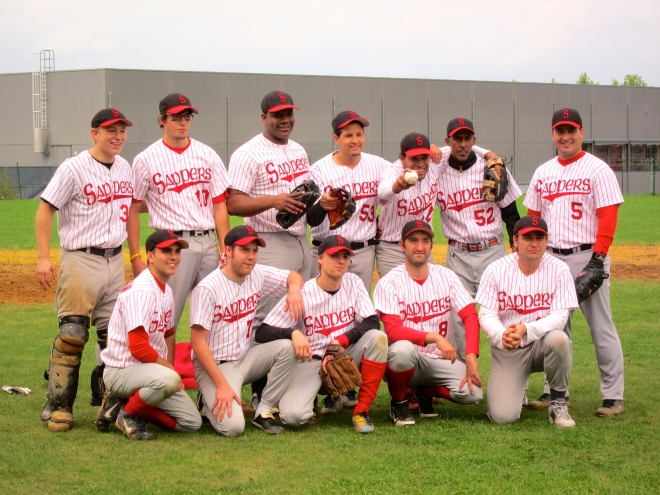 2 months removed from the first two titles in team history we can calmly think back on an amazing and successful year.

We'd like to share a few facts of the 2013 season and on the future of the Sappers.

The Sappers had a tremendous 2013 season, they won 16 games with playoffs included and only lost twice (Beckerich and Saarlouis 2). The team had the best batting average of the league with 0,361 compared to 0,291 for the Hedgehogs and 0,195 for Phoenix.

Another big reason of the teams success was Pena who pitched 43 innings and had an ERA of 4,815, recorded 5 Wins and 5 Saves.

We will also remember this Sappers season because of Fermin R. who hit over a stretch of 7 games, a home run in each game (!).

Cormona A. became the rookie of the year with a batting average of 0,531 and 2 Home runs, he was providing good power and protection out of the middle of the lineup.

" I knew we'd win one day but not this fast. I knew we would have a good team with Nickels coming back and Cormona joining the team. The foundation of the team consisted of players like Strock D, Fermin R, Fermin J., Fisch and Pena. Another reason for our success was the progress of other players like Strock C. and the help from experienced players like Martinez, Valenzuela, Schneider and Maricak." Coach Strock's analysis of the past season.

As for the team itself, coach Strock has been happy to welcome a few newcomers and he has to see whether he will get all the pieces back from last season. " I hope to keep everybody together but it won't be easy as some people might have less time for personal reasons but I believe that we will be able to stay competitive next year. The task in the new division in Germany will be very difficult but we will definitely be aiming to stay in that division!"

The team will be in a league where they will play against unknown and tough opponents like Mainz Athletics 4, Kaiserslautern Bears, Bad Kreuznach Cobras and Speyer Turtles. They will play each team 4 times, each time they meet it'll be a double header of 7 innings. The task will be very difficult for this young team but the team is working hard in order to be ready for that championship.

More over the Sappers would like to continue to play successful baseball in the luxembourgish championship.

On the subject of the Red Sappers getting their own field, a lot work remains to be done but the Sappers have a project that has been dropped off at the commune and talks have been quite progressive with the commune. It seems like the Sappers might have the possibility to play their home games in Dudelange pretty soon. Stay tuned for further news.

We wish everybody a Merry Christmas and Happy Holidays. If you'd like to join the team feel free to contact us per email;-)