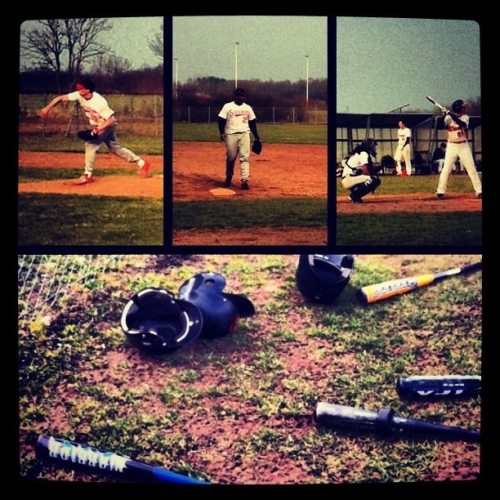 The Red Sappers lost on Sunday 22-19 vs St. Ingbert. The contest was breathtaking and lasted 4h25. The issue in this game wasn't the offense but it was pitching. The Red Sappers certainly do have an ace in Pena but are missing badly a second pitcher.

Since Pena is only allowed to pitch 3 innings in Germany the Red Sappers are always in a quest for a second pitcher who can give the Red Sappers a chance to stay in the game. Coach Strock had hoped to have Eich in the roster which injured himself on saturday during a handball game. The late scratch was pivotal for a Red Sappers team that nonetheless proved that they wouldn't give up a ball game that easily.

Coach Strock tried other options, he tried with Schneider, then with Scheulen and also with himself. But those 3 pitchers couldn't constantly throw strikes. The St Ingbert batters had a lot of patience (19 walks!!! and 15 hits) vs 28 hits by the Sappers. After 3 innings Pena had 5 Strikeouts and allowed 3 runs.

The Red Sappers were trailing late in the game and had chances to come back into this game. Down by 4 at the top of the 8th, Drauth was at the plate with the bases loaded but he struck out to end the inning. At the top of the 9th Strock led of the inning with a single, he stole second and third easily and scored on a Pena double. On an intentional walk to Sanchez, which put runners on first and second Schneider hit a run scoring single. Down by 3 Guichard came to the plate with runners at first and second and two outs but struck out to end the contest. The Red Sappers showed that they have a group that wouldn't give up!

Welfringer broke his foot while sliding in to first base, he will miss the rest of the season. We wish him a good recovery!

Stats from the game: