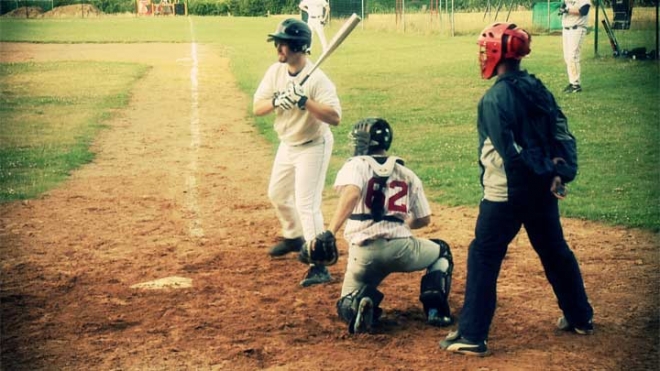 In a wednesday night game at Stade Meyer 3 in Dudelange the Red Sappers 2 lost 20-8 against Beckerich 2. The cold temperatures didn't make it comfortable to the 30 spectators attending the game but they saw an entertaining game. The score doesn't translate the game itself, but the more the Red Sappers play games the more they know that they have a pitching problem. They have Pena but behind him there is no competitive second pitcher. So Coach Fisch and coach Strock will work on several prospects.

Bintener has a accuracy but he is missing velocity. The team will definitely work on his arm and his technique to see whether he could be a future pitcher. Yesterday too many walks were allowed to opposing batters.

Strock C. showed a lot of talent, unfortunately he is also playing handball so he might not always be available to pitch with the Red Sappers.

Yesterdays game saw the debut of Kutzner (he had a hit) and Klose (he had a walk). Both showed a lot of talent.

The game started with an offensive outburst by the red sappers but it quickly vanished as they couldn't score more than 8 runs vs Melmer who surely will develop as a good pitcher.