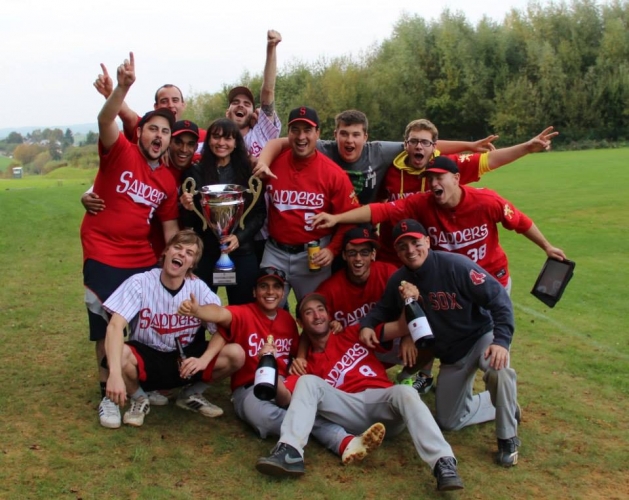 
The sappers won their second national title in a row against their rival the beckerich hedgehogs in dominating fashion. Final score of the double header was 17-0 and 22-7. In this best of three series the sappers never gave their opponent a chance, playing clean defense an hitting the ball hard.

In game 1 Godoy was the starting pitcher for the sappers and Lutgen after missing most of the season was the starting pitcher for the Hedgehogs. After one inning the score was tied at 0-0. In the bottom of the second inning player and manager Strock D. set the tone with a two run home run in his first at bat of the season. “ Off the bat I thought it was a lazy fly out to the left fielder but he kind of lost it in the sun and the ball had the distance to just clear the fence. I never could’ve imagined after being side lined for a long time to hit one out in my first at bat. But it did which was amazing!” Godoy was nearly perfect as he allowed only one hit to the hedgehogs hitters. Offensively the sappers hit a total of 4 home runs in this game, one by Strock D, Fermin R., Godoy and Maricak M. The Sappers wouldn’t give this game away and would cruise to a 17-0 win over 5 innings.

Game 2 of this 3 game series was different. Starting pitcher for the H’s was Gomes and Pena for the sappers. Gomes had a good outing until Fermin J. hit a 3 run home run to make the score 9-3. “That home run hit by my son determined the outcome of the game, it chased their starting pitcher and it gave us a comfortable lead. With the score being 6-3 anything could’ve happened, but this play made it 9-3” So the comments of Fermin R. Another notable performance of game 2 was Nickels offensive stats, as he was 4th in the lineup just batting behind Godoy who inexplicably was walked intentionally throughout the game although the next two hitters were Nickels and Fermin R. had a 3 home run game with 8 RBI’s (!). That was the right way to pick up his team mate who’s bat got taken away by the hedgehogs. The Sappers would win this game 22-7 after 7 innings of play and the sappers claimed their second national title in as many years.

It was a very dominating performance by the sappers and it gave the sappers an indication in which direction they will go in the upcoming season. “I expect our guys to work hard in the winter in order to be ready to finish in a better position in germany as we did this year. Especially we would like to compete with Kaiserslautern, although it will be very hard, we will try to be ready for them. One thing will be very positive for us, Pena should be able to pitch full games in germany since he will be living in Luxembourg for more than 5 years. I am looking forward to that! Also Godoy has confirmed to stay with us and so will the rest of the group which means our best pitchers will be back for next year giving us an awesome 1-2 punch!”

We thank everybody who has supported the team throughout the season, players who have come to the games, the practices and the committee who does their background work. All of it makes it possible for us to compete well! Looking forward to next season! Go Sappers Go!