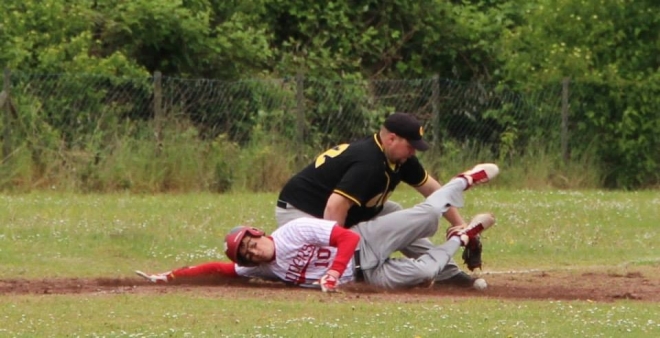 STRONG START TO THE SEASON

The Sappers had their first championship games of the season this weekend and won the doubleheader against bad kreuznach cobras (20-10 and 11-1).

After finishing the season in first place in 2013, the sappers played their first verbandsliga game in team history. This season every championship game will be played in double headers forcing each team to have enough pitchers in order to be competitive.

In game 1 Nickels was the starting pitcher but too many wild pitches and base on balls allowed the cobras to keep the game tight. Pena relieved him at the top of the 4th with nobody out. Pena pitched out of traffic and allowed only 3 runs over 3 innings.

Offensively the sappers were dominating with pena (3-5), godoy (3-4), nickels (4-5) and fermin r. (3-4) leading the team. Everybody in the lineup would reach base during the course of the game.

Game 2 was all about the sappers starting pitcher Godoy allowing only one unearned run over 5 innings while striking out 8! He is definitely a tremendous addition to the team which allows the sappers to be competitive over 2 consecutive games.

Offensively the sappers kept reaching base with godoy going 4-4, fermin r. 2-4, maricak 3-3. But the sappers scored most of their runs due to wild pitches or defensive mistakes by the visitors.

It was a great day for the sappers and they hope to keep it going in two weeks when mainz will visit them in beckerich on may 25th! However the task will be much tougher against this experienced opponent.