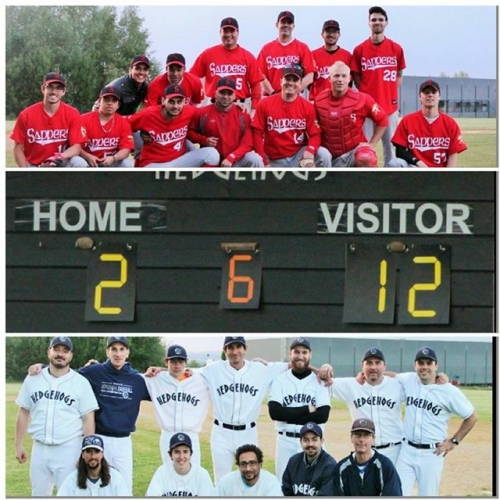 It was the luxembourgish championship opener last week and the Sappers proved to be ready to defend their title.

On thursday (21/05) the first team faced the second team of Beckerich. They faced a good second team from beckerich but the sappers were able to put pressure continuously on the hedgehogs defense. Lutgen who was pitching for the hedgehogs proved that he is still a very reliable pitcher.

As for the sappers pitchers they showed Manager Strock that he has a few options on the mound. Pena (2 IP, 1 run), Strock C. (3 IP, 1 run) and Godoy (1 IP 0 runs) shared innings and would only allow 2 runs over 6 innings. That 6th inning might not count officially as official week day games this season will only be played over 5 innings but the managers agreed beforehand to try to play as long as day light was available. Final Score of the ballgame 12-2.

The very next day (22/05) the second team played their first game of the season and had a lot of rookies in their team (Santos, Marques, Povoas, Gomes). But the whole team showed a lot of patience at the plate and scored a lot of runs thanks to the fact that they kept the line moving. The offensive production was highlighted by the first career home run of Gomes and another home run by Pena.

Pena was the starter for the sappers as Strock C was unavailable for the game. He didn't have much defensive support but pitched through 4 innings while the hedgehogs scored 9 runs of him.

At the bottom of the 4th with the score being 9-9 the sappers scored 5 runs to make it a 14-9 lead. In the top of the 5th Schneider came in to close out the game. He ran into trouble and would allow 4 runs but he was able to close it out. Final score 14-13.

It was the first ever win the second team could celebrate against the first team of Beckerich. It was certainly a stunner but we congratulate our second team!