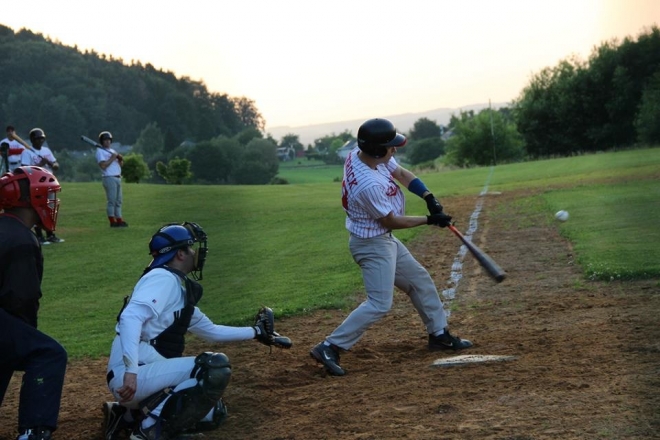 As the Red Sappers wrapped up the first part of the season Friday (05/07/2013), it's time to evaluate the results.

The Red Sappers are in first place in the Luxembourgish (BSFL) and German championship (SWBSV) and combined have a 11-1 record.

The lone loss came against Beckerich Hedgehogs 6-5. That game was very close and the Red Sappers finally won their first game ever against Beckerich a week later. With a record of 3-1 and 2 games to play in the BSFL championship the Red Sappers are on pace to finish in first place at the end of the regular season and secure home field advantage for the Finals played in a best of 3 series on september 29th and october 5th.

In the German championship the Red Sappers have won 7 games and didn't lose any game. They have 3 games left and have a good chance to finish the season unbeaten. The Red Sappers are also one win away from celebrating their first championship and a promotion to the Verbandsliga (higher division) which the club has yet to decide whether they want to take that step or not.

"The reason of our success is our offensive power, we have several players who can hit a home run any time. Offensively we have two players who carry most of the load with Fermin R. (8 HR's the first part of the season in 12 games (!)) and Nickels who also added 4-5 Home Runs. Both of them have been the teams best players and have a great chance to become the leagues MVP.

Cormona has been a great addition to the team, his experience and offensive power provided a huge spark (2HR) as well as Pena who is constantly putting up great numbers (2HR).

On the defensive side we can count on 4 different pitchers with Nickels pitching most of the innings. Especially in Germany he is the key to our success because Pena is not allowed to pitch more than 3 innings due to the foreigner rule. Strock C. is in the learning process and I see a great future in him as a pitcher. Schneider has been our reliever and he provided a clutch performance last week in trier. The difference between last season and this season is that we make a lot less errors on the field which is why we are able to win these games and our pitching has improved a lot.

If we keep the team together as it is we have a great chance to win the division as well as becoming the Luxembourgish champion, but the Hedgehogs will be a tough opponent to beat, the team has to fight until the last out of the last inning!" These the comments of Manager Strock to the first part of the season.

These are the winning ways in Dudelange, something that Red Sappers in their 7 year old history haven't witnessed, now can they go all the way? "I always thought we'd win at some point but not this fast, I'm proud of the guys!" adds Manager Strock.

The second team has 3 more games this month, beginning with wednesday against Beckerich 2 at 7 Pm.

The next game for the first team will be on August 28th against Diekirch (BSFL) and September 1st against Bous (SWBSV). If they beat Bous they can already celebrate the championship in Germany!